Although widely used in industry, organocatalysis has classically been limited to ex vivo application. In addition, the small molecule activation of enzymes has so far been exerted by allosteric control. A union of the two concepts has classically been considered unattractive, as partaking in the reaction would require binding to the enzymatic active site. This in turn would render the molecule an inhibitor as desired high compound concentration for high reaction turnover would compete with the originally intended substrate. However, this interpretation ignores enzymes with complex biochemistry, where substrate hydrolysis is achieved by consecutive steps of replacement and cleavage. Here, the inhibition or enhancement of single steps is conceivable with more complex mode of action. Recently, we reported that small molecules can act as organocatalysts for the DNA repair enzyme 8-oxoguanine DNA glycosylase 1 (OGG1). The underlying principle allows for a full control of enzymatic function with potential for alleviating oxidative stress to the genome or as a new strategy in cancer therapy. To built on this discovery, we focus on three pilars, leveraging our expertise in medicinal and computational chemistry, biochemistry and biophysics and collaborate where needed. Read more about our research below:

In June 2022, we were first to report cellularly active organocatalysts - OGG1 activators assist the enzyme in reaction turnover and diversification of substrate and product scope. Based on some of the findings, we continue to drive synthetic chemistry with help of X-Ray co-crystal structures and computational chemistry. Our goals within this context, are the exact control of product scope, the tuning of a defined pH range of OGG1 biochemical reactions and the selective targeting of cellular organelles. With this achieved for lead molecules, we collaborate with disease experts to reach proof of principle in disease models driven by OGG1 biology or oxidative stress to the genome in general. 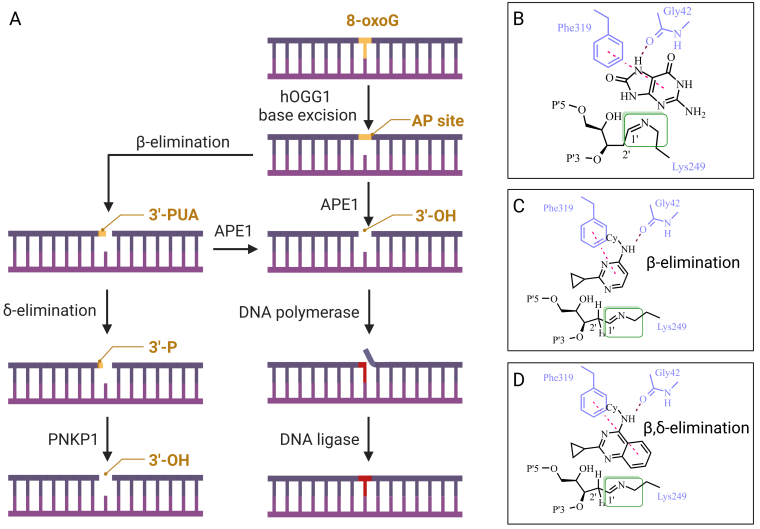 Mechanism of organocatalysis in base excision repair initiation by OGG1: A) Upon base excision of 8-oxoG an abasic site (AP site) is generated, which in turn is a substrate for APE1. Even if OGG1 exerts its weak β-elimination function, the generated product 3’-PUA will remain a substrate for APE1. In that way OGG1 function always depends on APE1. B) After base excision, Lys249 and the opened form of the AP site form a Schiff-base, also referred to as an Imino group (green box). The cleavage of this group is the rate determining step in base excision repair initiation mediated by OGG1. Further, the formation of this functionality temporally removes OGG1 enzyme copies from the catalytic cycle. It has been suggested, that the excised base 8-oxoG can to some extend initiate the cleavage of the Schiff-base by β-elimination. C) TH12117 was developed as a small molecule activator, that acts as an organocatalyst. The molecule can replace the excised base and interact with the same amino acid residues. This interaction enables the molecule to abstract a 2’-proton more efficiently than 8-oxoG, initiating a β-elimination event. The generated reaction product releases the Lys249 residue and OGG1 can enter a new catalytic cycle. In the meantime, the product is directed towards APE1 dependent repair. This pathway has developed during evolution and deals with lesions arising from 8-oxoG excision in higher organisms. D) More potent activator TH10785 has a stronger interaction with the Phe319 and Gly42 residues due to an extended ring system. This enables a more pronounced β-elimination and in addition a novel δ-elimination. Thus, OGG1 can repetitively enter new repair cycles. While base excision repair initiation is further increased with TH10785, the repair of the generated product is no longer APE1 but rather PNKP1 dependent. This enables a rational overload of a new repair pathway with lesions derived from both 8-oxoG and AP sites. Light blue – amino acid residues of OGG1; green box – Imino-group; magenta – aromatic interaction (π-stacking); purple – H-bond

2. Broadening of the technology base of enzyme activation

Although OGG1 is no significant AP-lyase in cells, DNA glycosylases with pronounced β- or β,δ-AP lyase activity exist in humans and other species. Understanding how these activities are controlled on a molecular level, allows us to alter enzyme function at will and thus generate new DNA repair pathways for the treatment of disease. We perform computational calculations to elucidate chemical and biochemical reaction mechanisms, generate amino acid mutants, develop organocatalysts and engineer proteins through amino acid selective modifications and bioorthogoanl chemistry. The ultimate goal: enabling enzymes to cleave non-natural substrates through previously unreported reaction pathways. To achieve this, we leverage our expertise in bio-macromolecules, enzymes and organocatalysis. The implications of this research reach beyond medicine and thus we also collaborate with industry partners to impact biocatalysis.

3. The DNA glycosylase platform within EUbOPEN

Eleven human DNA glycosylases exist and most of them are considered understudied. Within the EUbOPEN consortium, we assemble all of them physically, develop in vitro and cellular assays for selectivity/activity readout and target engagement. In collaboration with partners at the Structural Genomics Consortium and Stockholm University we assemble crystal structures, antibodies and other reagents and enable investigation of the entire protein family. We donate this setup to the scientific community through protocols within EUbOPEN and Target2035. Ultimately, we thrive to combine our work on small molecule activators with these novel targets and enable the studying of DNA repair biology.

We are deeply committed to mentoring, coaching, teaching and supporting the next generation of students. For example, our strategic exchange program with the Universities of St. Andrews and Edinburgh has led to fruitful collaborations and a uniquely educated generation of undergraduate students – their success is our legacy. Reach out, if you want to work with us and shape the future in protein regulation.

Our work is highly collaborative on many levels and we are happy to be working with a number of skilled scientists from different institutions and sectors: