Use of the KI brand name and logo

Karolinska Institutet is a strong and recognised brand. In order to nurture and enhance the brand, KI has issued rules for the use of the brand name and logo.

A key aspect of the brand is its graphic profile, which gives an organisation a visual image and makes it easy to recognise and build a relationship with the brand. KI’s graphic profile comprises logo, typefaces, colours, design systems and images. Consistent use of the profile strengthens the brand while enhancing recognisability and uniformity. A clear and distinct graphic profile makes it more difficult for a third party to misuse/abuse it.
KI’s graphic profile can be found on the staff portal.

Use of the Karolinska Institutet logo

The Karolinska Institutet logo is the university’s signature and quality stamp and is to be used in all communication from KI. It consists of the university seal and typographical name. The logo is to be seen and used as a composite and indivisible whole.

A department, unit or division at KI is required to use the logo in its communication. The brand and logo represent the university as a whole and in its parts.

Logo and graphic profile on the web

Study programmes, projects, departments, research centres and other organisational units all help to augment the Karolinska Institutet brand by using the KI logo. No unit may develop its own logo, but must state its name in plain text alongside the KI logo, like so: 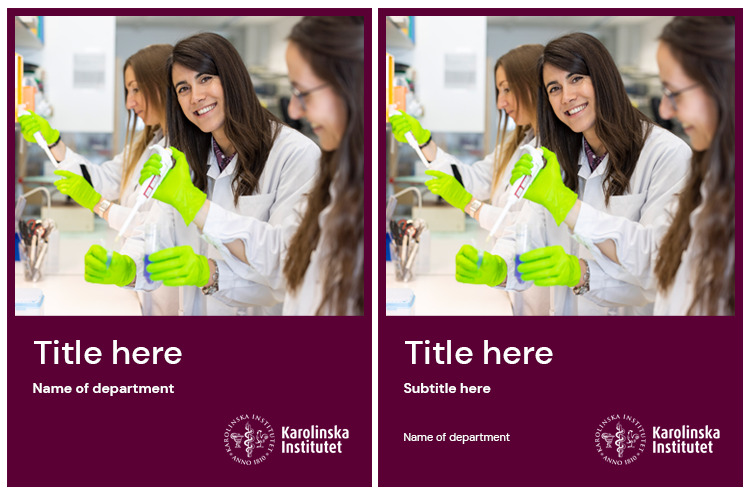 A project started within KI must a use clearly descriptive name and may not use its own logo or other project-specific symbols/illustrations. The project name is to be written out in plain text with the KI name and logo denoting the communicator for all communication, internal as well as external.

Research centres formed within KI and with other organisations

Caption:
Research centres profile themselves using the KI logo and the name of the research centre in plain text.

Profiling an external brand with the KI logo and brand name

Several things must be considered when using the KI brand in combination with external parties. It is important for the other brands to accord with KI’s activities (see “The brand in collaborations”) Brand strategy – building a single KI brand. The way in which the KI brand may be used depends on the type of collaboration. Here are three common examples:

1. Karolinska Institutet is the main party in a collaboration

The design is to be based on the KI identity and graphic profile. The partner’s logo is to be rendered at about half the size of the KI logo and in most cases accompanied by an explanatory text (e.g. “In collaboration with”). The partner’s name can also be rendered in plain text without logo. If both are used, the logos are to be placed on opposite sides of the space allocated.

2. Karolinska Institutet is part of a project run by one or more parties

The design is not to be based on the KI identity and graphic profile. KI appears by name only, or by name and logo. If the KI logo is used, it is accompanied by an explanatory text (e.g. “In collaboration with”).
A written collaboration agreement containing a clause on brand use must be in place before the KI logo can be used.

If an external party applies for and obtains the right to use the KI logo, such use must be regulated in writing and given a specific end-date. If the collaboration involves a particular researcher or research group, his/her/their employment status at KI may be stated in plain text (e.g. “The study was conducted in collaboration with Anna Andersson, researcher at the Department of X, Karolinska Institutet”).

3. KI runs a project with one or more equal partners

The design is not to be based on the KI identity and graphic profile. Instead, a neutral design is to be used with the logos placed beside each other.

Karolinska Institutet and Karolinska University Hospital, for instance, have joint templates for such collaborations that use neither the KI nor the hospital brand colours (plum and blue, respectively) in the layout or text but a neutral grey palette.

Use of the name Karolinska Institutet

The name identifies our business, creates recognition and is an important and valuable asset that has to be handled with care. Study programmes, projects, departments, research centres and other organisational units may not include the name Karolinska Institutet or its abbreviation KI but must be communicated descriptively and in compliance with the KI graphic profile, unless exceptional circumstances move the University Director to decide otherwise.

The name shall always be written in accordance with KI’s Style guide for written communication.

The abbreviation KI in a digital context

In some cases, particularly in a digital context, there is reason to use the abbreviation KI, such as in the name of a system (KI Mediabank) or a seminar series (KI-xxx). If the abbreviation is used in a heading/name, Karolinska Institutet must be written out in full in close connection to it; alternatively, the abbreviation may be complemented with the KI logo.

In external contexts it is not obvious what KI stands for, as there are other organisations that are abbreviated in the same way. To avoid confusion, the whole brand name shall be used wherever and whenever possible.

Risk of confusion in the name “Karolinska”

“Karolinska” is a jointly trademarked asset for Karolinska Institutet and Karolinska University Hospital, and its handling is regulated in joint guidelines. To avoid confusion, it is important never to refer to KI as just “Karolinska”.

Always Karolinska Institutet – regardless of language

The brand name is never to be translated to other languages in writing. In English, therefore, we are also known as Karolinska Institutet.

The use of the KI brand in different roles

The brand may be used in different ways for different purposes. It is important to always be clear about your role at and connection with KI in your communication with others. This is particularly important for those with more than one role.

The KI graphic profile and logo may only be used for official business and in channels within KI’s control. This applies to all employees, including employed doctoral students and others on hourly contracts, such as student ambassadors.

Affiliated employees may use the KI graphic profile and templates when communicating in this capacity.

Only the KI logo may be printed on a thesis ahead of its defence at KI. If the doctoral student has received external funding, a request is often made to have the funding party’s logo included on the cover as well; this is, however, not permitted and the student must, if he/she so wishes, thank the party in the body of the text. For thesis templates, see Layout and printing thesis.

When submitting degree projects at an official (C and D) level, students must use the KI logo and comply with the KI graphic profile. Course coordinators shall supply approved templates and make sure that students follow the rules governing the use of the brand and logo. Students are not, however, authorised to use email signatures, business cards and letterheads bearing the KI name.

Material produced jointly with the Medical Students’ Association in Stockholm (MF) and the Student Union of Odontology (OF) is subject to the “dual control” principle, since the parties involved are considered equal (see “Profiling an external brand with the Karolinska Institutet logo and brand name”). This means that a neutral design (i.e. not the graphic profile of KI or either union) must be used and that the unions’ logos must be the same size as KI’s.

Suppliers and consultants engaged by KI may not use the KI name or logo in their marketing. One example of this is when a supplier or consultant wishes to use the KI logo to display KI as a reference customer in its external communication. As a government authority, KI has limited opportunity to figure in these contexts.

Exceptions are possible in specific instances, and only then with the written approval of KI after consideration of the request. A clause on brand use is generally included in KI’s agreements.

When KI projects and/or the like receive financial support from an external party, the financier/sponsor sometimes requests use of the KI brand (usually the logo) in its marketing. External funding does not entitle the party to use the KI logo (see the rules on endowments and sponsorships). KI may, however, thank the financier/sponsor in its external information. There is also sometimes reason to publish the financier’s/sponsor’s logo on webpages or printed matter produced by KI (provided that approval to do so is given).

There are cases, such as ahead of a major seminar, in which a sponsor may make one-off use of the KI logotype; such use shall always be regulated by agreement.

In the case of endowments, it is permitted for the donor to communicate the fact that a donation has been made to KI provided that KI has accepted it with a signed deed of gift. An example of such an instance is a company that sends a message to its customers that it has donated money to KI instead of purchasing a traditional Christmas gift. The name Karolinska Institutet is to be written in the main text but the logotype may not be used.

More about fundraising and donations

Fundraising and donation management support for KI’s researchers and departments

More on this topic