To search for experiments, you use the search box at the top of the screen.

The pre-written text in the search box indicates where in your KI ELN you are searching, which in turn depends on where you are on the left-side menu.

The system will search for the keywords you have typed in all sections in experiments, titles, attached Excel, Word and PDF files.

When clicking “Advanced” next to the search box you can be more detailed in your search and add different settings.

This makes it easier to narrow down the hits and to find a precise experiment or information.

The Chemistry search is available in the Advanced search. The Chemical Structure can be used as a standalone search or combined with other criteria. Query atoms follow the standards for your chemistry database.

You can upload, paste, or create a structure to use in your search.

When a structure is defined, you can choose whether to perform a Substructure search or a Similarity with your specified percentage match threshold.

You can include Reaction Yield in searches. Entering a value in Reaction Yield will retrieve Experiments where the percentage yield in a reaction section is greater or equal to the entered value.

You can choose whether to require perfect stereochemistry matching for a structure search. By default, search will return complete matches of all stereo centers specified. Check Ignore Stereo to return all stereoisomers.

Filtering in All experiments

You can also search by filtering in the section “All experiments” in the left side menu.

The search result, regardless of type of search, shows up as a list.

You can choose the layout of the list in the drop-down menu to the left.

The search result can be exported to Excel by pressing the "Export to Excel" button under the search layout drop-down menu.

Saving a search in "My searches"

If there are searches that you perform often, you can save them and have easy access to them in the left side menu under “My Searches”.

You save a search by performing the search under “Advanced”, and then clicking on the “Save as” button.

For information on how to the superuser can create lookups see the dedicated lookup page.

Suppose that your administrator has configured a lookup type called Cohort.

One of the terms in the lookup type is AB010.

By running an advanced search on the term AB010 in Cohort lookup sections, you can limit your results to experiments that are explicitly labeled as being for AB010

By contrast, if you search for the word AB010 in the basic search box, all experiments are retrieved that contain the word AB010, in any section.

This might retrieve experiments that are not relevant because they only mention the word incidentally. 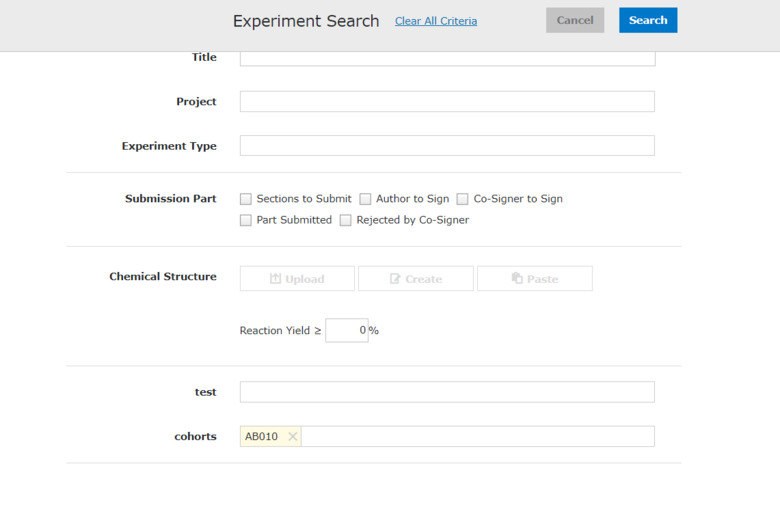